Next stop on the whirlwind European section of the trip was Berlin. We spent less than 24 hours in Berlin, so I picked out some highlights to make a whistle stop tour for Clara, as I spent a month in Berlin last summer. Here are my personal top five hits of Berlin that I would recommend if you only have a short time in potentially my favourite city in the world.

Nummer Eins: The Memorial to the Murdered Jews of Europe

This is, for me, one of the most important things to visit whilst in Berlin, the city so packed full of memorials and history that entire tours revolve around them. Although it doesn’t mention the Holocaust in the name, this memorial is dedicated to the six million Jews murdered by the Nazis. A stone’s throw from the Brandenburg Gate, this memorial’s design is unusual to the say the least. Varying heights of pillars stand together, and the floor slopes downwards as you venture inside, until you are completely lost in the maze. The height of the columns, reaching double your own height, creates a sense of extreme disorientation and isolation, and it’s very easy to get lost. Clara and I went on our first evening in the dark, and the columns were so oppressive that we didn’t dare walk all the way into the centre until the following morning, when the sun had reassuringly risen again.

I think that this memorial, although the architect never explained their thought process, is designed to emulate a small sense of the fear, isolation, and confusion that the Jewish people experienced in being separated, trapped, and terrorised during World War Two. Although obviously a visitor can never understand their experiences, this memorial is one of the most powerful and moving tributes I’ve ever been to, and is more than worth a visit. I’ve been at least five times now, and every time I’m hit once again with the enormity of the memorial itself and what it stands to remind us of.

Across the road from this memorial, within the Tiergarten, Berlin’s largest park, is another, less tastefully-done memorial, the Memorial to Homosexuals Persecuted Under Nazism. There are memorials all over the city for various groups persecuted by the Nazis, and rightly so, but this one was, for me, handled badly. The memorial is a cube made out of a similar material to that of the columns of the Memorial to the Murdered Jews, with a hole that visitors can look through into the inside to see a looped video of two men kissing. It struck me when I first saw it, and has done everytime I’ve returned, that this memorial seems to focus so heavily on the sexuality of those who died in a way that no other memorial does, and in such a weirdly voyeuristic way. The people who died because of their sexuality were much more than just homosexual. They had jobs, nationalities, hobbies, friends, family, a huge amount of other factors that weighed into their personalities, and yet this memorial brings only their sexuality to the minds of people wanting to pay their respects. The Jewish memorial wouldn’t have been emblazoned with the Star of David, the Memorial to the Sinti and Roma Victims of National Socialism, also nearby in the Tiergarten, isn’t marked with the respective flags. A memorial, in my opinion, should be there to pay tribute to the people who lost their lives, not to point out the reason why, which I think actually isolates them even more, even after death. They deserve better.

To lighten the mood slightly after a sombre start, the Brandenburg Gate, just round the corner from the memorials, is a must-see to get that iconic Berlin photo. It’s also where loads of free walking tours start, where people better informed than I am can breeze you through the best parts of Berlin and give you all the facts too detailed for me to put down here. Berlin, as you would expect, has so much history, so I’d definitely recommend getting a pro to show you around. 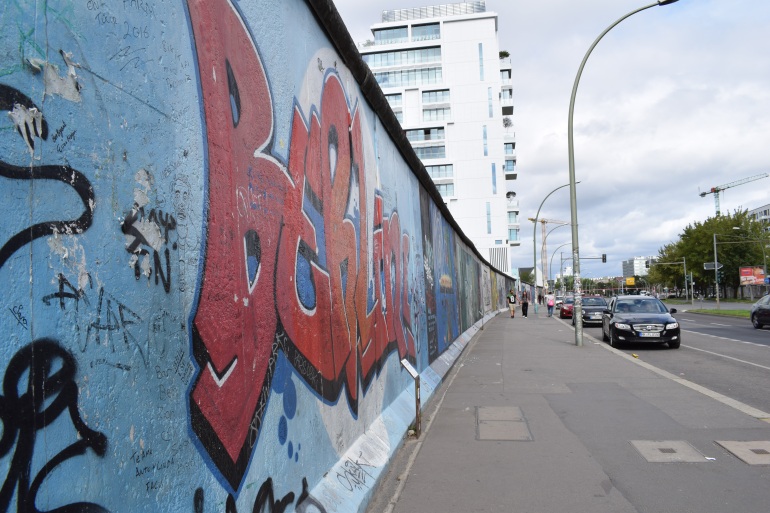 The longest section of the Berlin Wall still intact today is worth a visit in itself, but it’s also been utilised as an area for urban artists to come and make their mark on their own section of the wall. Some pieces relate to the Wall, some to other political statements and crises, some are harder to figure out. Others have come by to leave their tag, express agreement with the artist, or just draw random genitalia, and this part of the Wall stands as a testament to the passing of history over the last 50 years. There are reactions to the fall of the Wall immediately afterwards, memorials for those who died trying to cross, right up to comments on the Afghanistan War, reactions to the immigrant crisis or the Trump Campaign. The progression of recent history cannot be seen in any more of a unique way than here – leave plenty of time for it though, at least an hour and a half, as it’s pretty long, and you’ll want to stop and appreciate certain pieces.

While I didn’t go to the museum on this trip, having literally no time, I enjoyed it so much last year that I thought it had to go into my favourites. I’m not really a museum-loving kind of person, but everything about this building was fascinating, from the content to the architecture. Unlike the standard Holocaust-centric ideas about the Jewish race after World War Two, the aim of the Jewish Museum is to map the history of the German-Jewish people over the last 2000 years, giving visitors a much wider perspective.

The very structure of the building is used to great effect in a variety of ways, adding to the fascinating content of the museum. Upon entering the exhibition, you are immediately faced with three corridors, the three Axes: the axes of Exile, of Continuity and the Holocaust, skilfully designed through changing gradients and sloping ceilings to represent the three main obstacles faced by the Jewish race in Germany throughout time. By standing in the base of the Holocaust Tower, a tall, almost pitch-black room that symbolises the recent horrors of the Holocaust, and walking through the Garden of Exile, where gradients in between towering concrete blocks create a dizzying feeling, visitors can immerse themselves in disorientating emotions designed to mimic those of the Jews themselves, reminiscent of the effect of the Memorial to the Murdered Jews. Empty, unused spaces, nicknamed ‘voids’, are placed throughout the building in varying sizes, often with peep-holes so that visitors can literally peer into the void. The aptly-named Memory Void, is the only one with anything inside: 10,000 roughly-cut iron faces of horror by Israeli artist Menashe Kadishman in tribute to the victims of the Holocaust.

The unique aesthetic of the museum beautifully complements the content, and the fact that it draws on 2000 years of Jewish history, for me, makes it vital to visit, as it is so easy to reduce the race purely to the Holocaust, but there is so much more to know, and so much to value.

If you hadn’t got your fill of urban art from just walking around Berlin, come here for the speed run. Every inch of the walls lining Street Art Alley, hard to spot off Rosenthaler Platz, is covered in graffiti and street art. Not all is as politically minded as the East Side Gallery, but there are splashes of social commentary here and there. Most of it is just mind-blowing artwork, funny cartoons, and sarcastic slogans. It’s a vibrant mix of the best features of youthful urban art: snappy, colourful, and volatile.

On the same street are two more museums worth a visit: the Anne Frank Museum, and the Otto Weidt Museum, both telling stories of subterfuge and secrecy when Germany was under the control of the Nazis. While Anne Frank might be well known, Otto Weidt is one of the more unsung heroes of the resistance to the Nazis, and the museum gives you detailed information in a very short amount of time, ideal for brief stays in the capital.

These have been my top five highlights of Berlin, but, as I said, it is one of my favourite cities, so obviously there is a wealth of other things to do and see. My advice would be to just spend a day without a plan if you can: Berlin is the kind of city where the best things just fall into your lap, and there’s no doubt that in a capital so packed with history and life, you’re going to find something that you love.

Freelance Writer and Journalist View all posts by rachdaviesetc